Structures made of SSAB's cold-formed steel tubes were recently selected for a steel construction of tube bridges at Södra Cell in Värö. Thanks to the material choice, both costs and environmental impact were able to be reduced. The company Hjalmarsson in Sölvesborg used approximately 700 tons of cold-formed tubes and manufactured the pipe bridges that were delivered to Värö.

“As structures for buildings the cold-formed tubes have the same characteristics and meet the same demands as hot-rolled tubes. The end result gives both significant cost savings and a better environmental choice,” said Peter Sverin, regional sales manager at Tibnor.

Cost savings
Jan Österholm, technical development manager, and Magnus Johansson, account manager ,have for some time worked the Swedish construction market to try to persuade them to use the cold-formed tubes. For companies in the construction industry there are significant cost savings to be made at the same time as making better environmental choices when selecting cold-formed tube (CFT) for buildings instead of hot formed (HFT).

Committed partnership
Several different companies and actors have collaborated in this deal. SSAB as manufacturer of the tubes, Tibnor as distributor and seller, engineers from SWECO and Hjalmarssons in Sölvesborg who manufactured for NCC and Södra Cell as the end customer.

“A good example of a successful cooperation between all involved and where the cost and environmental impact were two decisive factors for carrying out the deal,” said José Rovira, area sales manager in Sweden for SSAB

Thanks to cold-formed tubes being manufactured with a production process that requires less energy, the environment suffered just minimal impact. The material is more common in Finland thanks to earlier establishment on the market with Ruukki and now there is a possibility of converting all the Nordic countries to using cold-formed tubes. 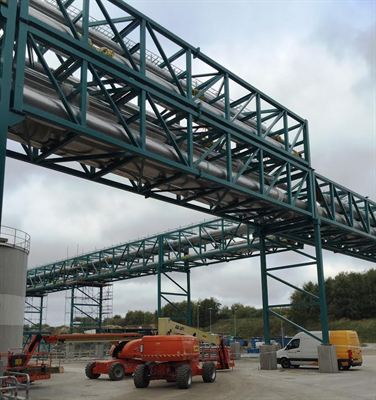