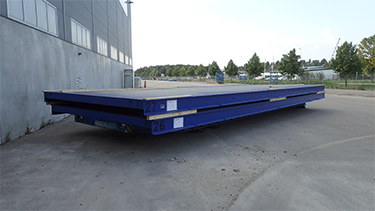 Modern, efficient construction uses modular systems where the components are typically built indoors. All wall elements are cast in sections and shipped to the construction site prepainted, with fitted windows and doors.

“This system requires us to maintain the right quality throughout the chain – from casting until the walls are lifted into place in the new building,” says Conny Andersson, head of repairs and maintenance at Benders Building Systems in Strängnäs, Sweden. This was one important reason when we chose SSAB’s building steel SSAB Domex® 355MCD for our new formwork pallets.”

Benders Building Systems is specialized in prefabricated building elements. At the plant in Strängnäs, complete elements are manufactured for all types of buildings.

“We more or less cover the entire construction project, from drawing through to completed building,” explains Andersson.

The shorter the time from construction start-up until the moving-in date for tenants or businesses, the better. It’s part of the secret behind the success of Benders Building Systems.

It usually takes 24 hours from the start of work on the components – like the wall of a new building – until it is finally loaded on a truck ready for delivery.

“We have a high production rate, and that’s why it’s so important for us to be able to rely on everything working as expected,” says Andersson. “That criteria meant a lot when we specified the material requirements before ordering new formwork pallets.”

Roughly, the production is divided into two branches:

“Just over a year ago, we began the process of ordering new pallets,” says Andersson. “We realized the potential to increase the standard for wear resistance of the plate. It’s important to achieve the longest service intervals possible for the pallets. For the most part, they’ve had impact damage or scratches to the surface. Such flaws are visible right on the finished concrete elements.”

“You can, of course, grind away many of the marks, but it’s best if the plate has as hard a surface as possible so there won’t be any damage like this.”

“If we’ve got to grind, durability always gets worse, and we get other problems at the same time,” explains Andersson. “When we grind, a certain porosity opens in the plate. It’s not visible, but do we have to be extra careful with the release agent we use so that the wall elements can come off when the concrete has hardened.”

Benders Building Systems previously used standard S235 steel for its formwork pallets. The new ones are made of SSAB Domex® 355MCD.

“We received the first shipments of the new formwork pallets in early fall and expect to save a lot on the upgrade to SSAB Domex®,” he says. The company has both less maintenance and more efficient production thanks to the fine surface.

“We wanted to know more about what options we had,” says Andersson. “We were looking for increased durability but also good corrosion properties and a fine surface.”


Sounding board at SSAB

Fredrik Lindqvist from SSAB’s Tech Support in Oxelösund visited the company and acted as a sounding board throughout the process.

“By going to Strängnäs, looking at their production and talking through the company’s requirements, we could suggest some of our products that would offer a good fit,” says Lindqvist. “We also discussed which companies could deliver the pallets.”

As a result, production landed at Elematic in Finland, who then purchased the steel from SSAB Raahe. The company specializes in manufacturing equipment and complete production facilities for the manufacture of large concrete elements.

“So far, we’ve had positive experiences when upgrading the steel to SSAB Domex® 355MCD and the job Elematic has done,” says Andersson. “This time we’ve just chosen a harder surface. But maybe next time we’ll also decrease the thickness. There are a couple of steps in the process where the lower weight could also give us some advantages.”