Bending is a manufacturing process where sheet metals are plastically deformed into complex parts by the application of a bending moment. The plate is pressed to the designed angle and bending radius by flanging a sheet metal part between a punch and die, selected for the individual part geometry.

If you have any questions or need additional information or price quote, feel free to
contact us. Our dedicated team is here for you.

In free bending, the plate rests on the upper edges of the die for the entire duration of the cycle. The required bending radius is dependent on the material grade, die width and punch radius. The die gap width can be adjusted. In bottoming, the stroke length is sufficient for the punch to press the plate entirely against the die. A profile matching that of the punch and die is formed in the plate. Air bending (free bending) in V-shaped dies is the most frequently used method.

When bending, the outside of the sheet material is stretched and the inside is compressed. The strain increases as the bending radius is reduced. The bendability of the material is therefore normally given as the minimum bending radius without failure.

Springback is caused by elastic strain. The springback increases with the yield point, the strain hardening and the die width. The influence of the yield point is greatest. Springback reduces with a reduction of the bending radius. Overbending is used to compensate for the spring back effect.

There can be a natural deflection that occurs in the upper part and lower elements of a press brake due to the resistance forces. The higher the bending force, the larger the deflection can become to the extent of a crowning effect and potentially a gap along the bending length between the upper and lower beam, which is largest in the middle and decreases towards the support frames. If the longitudinal gap is left without correction when the sheet or quarto plate is press bended it will not get the same angle throughout the length of the machine. A crowning system compensates for the elastic deflection of the bending machine allowing this gap to be minimized, giving better results over the length of the machine. In modern press brakes there is normally an automatic crowing system included that will minimize such effects. This is especially important when press bending high strength steels where final part quality is critical and part rejection must be close to zero with material costs. 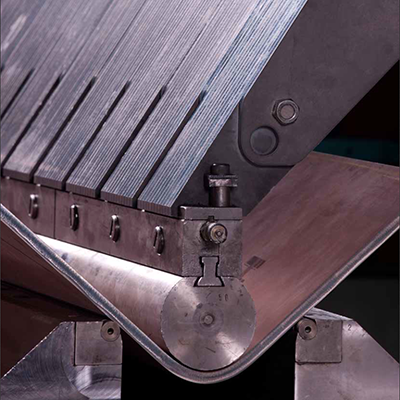 SSAB Shape can offer bending services from our own centers globally and in addition we have a service partner network that can be utilized. Our offer includes:

In many of our service centers we have the possibility to combine press bending of parts with other metal processing methods, for example laser cutting to fulfil your complete requirements.